Today we are going to learn how to deploy an app on Clever Cloud without leaving the terminal!

Clever Cloud is a PaaS, much like Heroku (except it’s cheaper and faster). Simply put: you push your app on Clever Cloud, and it runs. You don’t have to worry about anything, Clever Cloud is in charge of keeping your app up and running, fast and available to everyone.

Clever-tools was introduced three weeks ago (and today’s release adds some pretty useful features and fixes). It’s a tool which allows you to manage your apps and addons from your terminal. Pretty cool, right?

You can learn more about it in the offical announcement post.

To get going with clever-tools, you will need 2 things: a Clever Cloud account (obviously) and npm.

To create a Clever Cloud account, head over here: https://www.clever-cloud.com/en/

Then don’t forget to add your ssh key to your Clever Cloud account.

For the rest, I think you can manage. If you need help, please say so in the comments down below. :)

When you have those 2 things, install clever-tools:

Note: to install npm packages in your home and to avoid using root, set up a prefix in the ~/.npmrc file.

We are going to test this with a simple demo app. Open a terminal in your usual development directory and read on.

This will open a new tab in your browser, asking you to authorize clever-tools. After doing so, your OAuth tokens will be displayed. Meanwhile, clever-tools prompted you to enter your CLI token, copy/paste it; then do the same with the secret.

You should now see /home/you/.config/clever-cloud has been updated.

Create the app on Clever Cloud and give it a domain name:

We could just deploy it right now, but this app needs a MongoDB database. Let’s add one:

You will see the logs of your new app starting up and in less than a minute, it will be available at the address you set up! 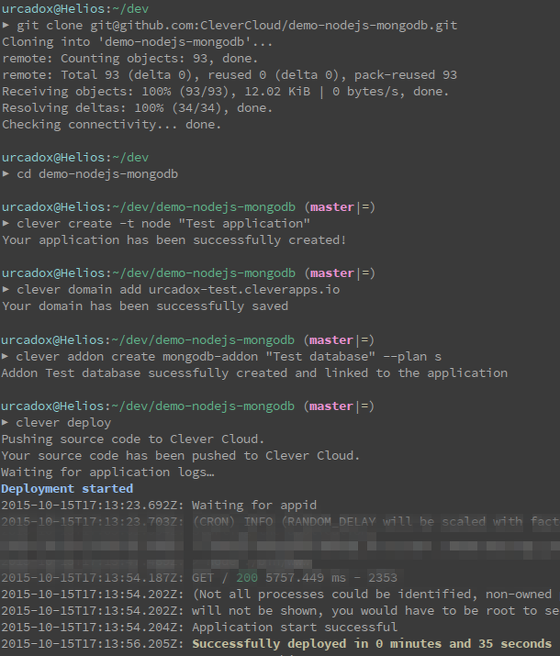