I have been working on this really fun project with David Guyon. He and a friend started it a while ago. We are now taking it to the next level by bringing a Raspberry Pi to the table.

So, what is the Pie-Boat?

Pie-Boat is… a boat. Well, it is if your definition of a boat is something that floats and is able to move on water; clearly, though, it doesn’t look like a classic boat at all. 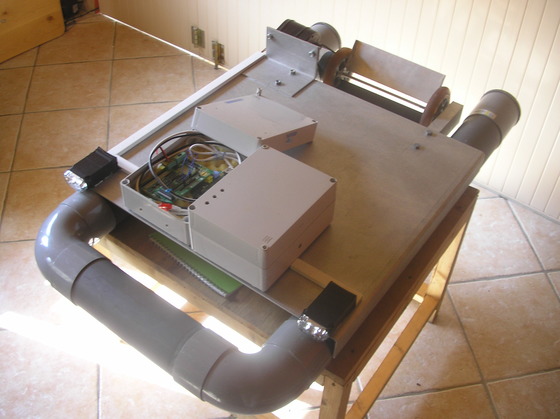 Currently, the boat itself floats (using big PVC watertight tubes). It has 3 working motors (one needs a little work support-wise) but the 2 on the sides lack a propeller (not on the picture above).

The goal, obviously, is for these motors to be controlled by the Pi with a PWM signal (sent to motor control boards). This is going pretty nicely, some adjustements need to be made, some tests are needed but it’s functional.

Plus, they can already be controlled remotely by sending plain text on a socket.

What is left to do

Currently we have a really basic control, motor by motor. Not very handy to handle direction. We will have to make some tests once we have the propellers to find good values to turn efficiently. In the end, the remote should only need to send a global speed and direction.

Speaking of which, the goal is to have an Android remote (on a device connected to a WiFi AP on the Pie-Boat) with sliders and/or joystick-like inputs.

We also intend to publish a full report including all details needed to replicate the Pie-Boat, this may take a while though. We will probably start with partial versions published along the way but we will get there eventually.

Everything will be available on GitHub in the Pie-Boat organization.

We are using Scala for everything, even for the Android app. It’s quite simple so it should be easily understandable by Java developers and accessible to other developers.

This is only an introduction, there will be more blog posts on specific parts of this project on this blog and on David’s blog.